Yesterday afternoon, Fox and I needed a change of scenery, so we decided to be really adventurous and go hang out on the bed instead of the living room floor.  We were playing with toys and books when Adam came home.

While we were catching up on the events of the day, we kept hearing this weird noise coming from the far side of the bed.  It wasn't constant, but happened often enough, that Adam went to take a look.  After going through everything that was by the bed, he determined that the noise was coming from inside the wall, and to be specific, behind the power outlet plate on that side of the bed.

I was totally freaked out, but Adam kept his cool and got a glass bowl and some paper.  He unscrewed the outlet and put the glass bowl over it.  Into the bowl crawled a GIANT wasp.  It was probably close to two inches long, and kept whirring around the bowl as it tried to fly away.

I kill insects in the house, if they are small enough (okay fine, Adam gets to handle anything bigger than an ant), but this one was huge and stings, so squishing wasn't an option.  I put on my bravest face and took it outside.  I carefully removed the paper from the bowl, jumping back as far as possible, and happily watched it fly away, all the while hoping that he won't be able to find our outlet again...

After that slightly traumatizing experience,  I am all freaked out about what is living in our walls (last year there was a squirrel)... For now, I am trying not to think too much about it.  I think life is better that way.

On a decidedly happier note, the last peaches of summer are on super big sale at my grocery store!  Some of them are lousy, but if you get a few good ones, there is nothing more lovely than a peach crisp on a fall evening.  This one is delightful, and very easy to whip together at a moment's notice. 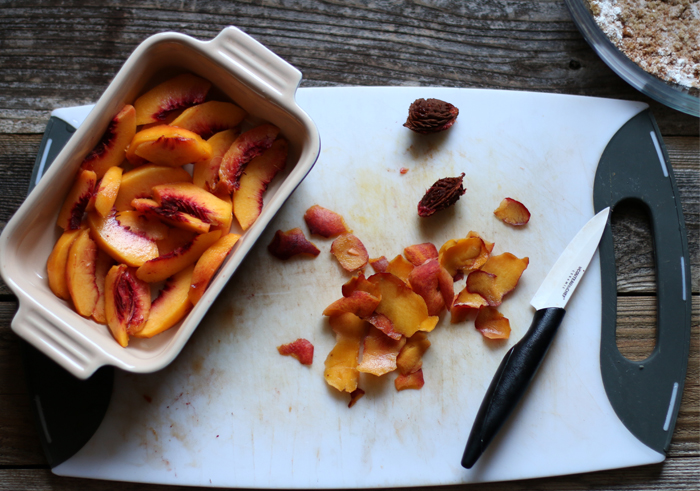 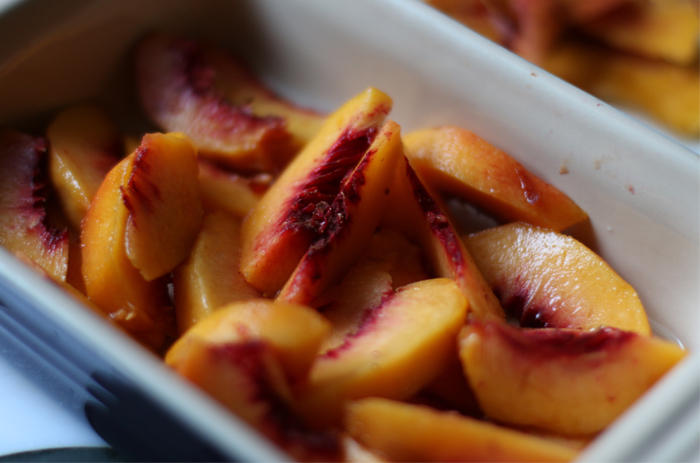 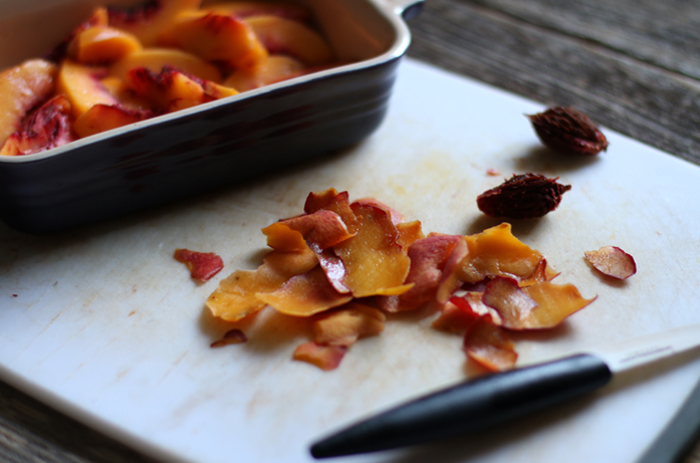 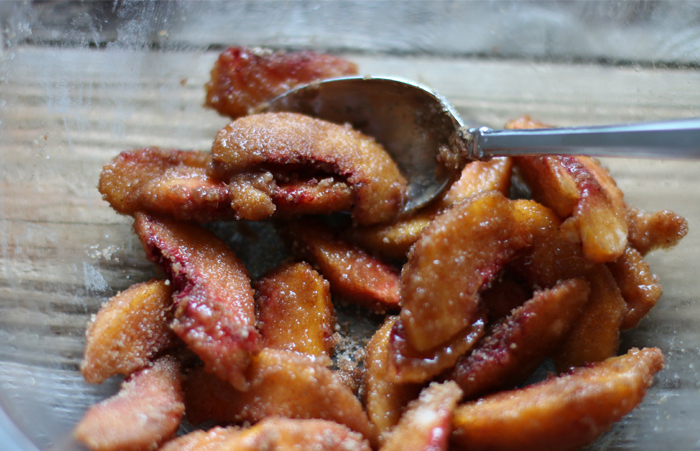 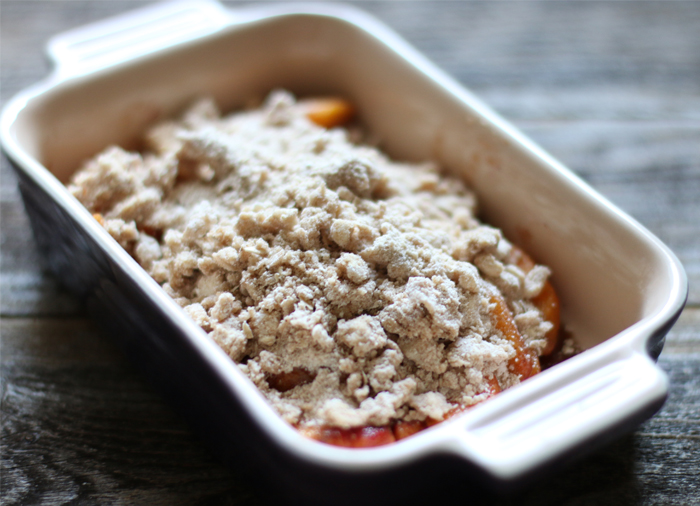 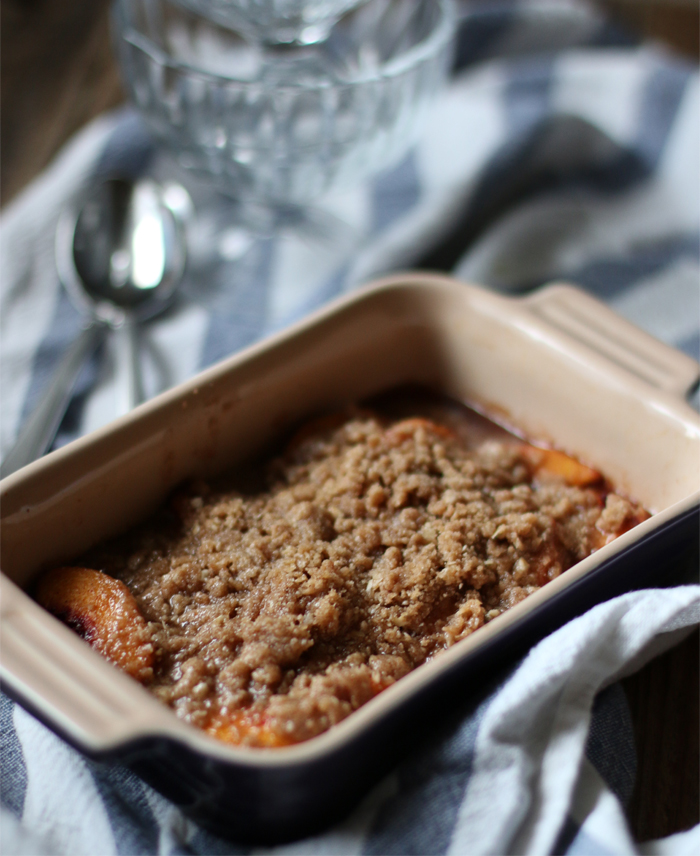 Prepare your peaches, and then put them in a large bowl.  In a smaller bowl, combine your sugars, cinnamon, nutmeg, lemon juice, and cornstarch.  Pour this mixture over the peaches and stir the peaches until they are coated in the sugar stuff.  Pour them into an 8x8 pan (I halved this, so I used a smaller dish) and spread until even.

Combine the oats, flour, sugar and cinnamon in another small bowl.  Chop the butter into small pieces and then with a fork or a pastry blender, smash it down in the oats/flour mixture until all the butter mixed in and each piece is not bigger than the size of a pea.  Pour topping over the filling. 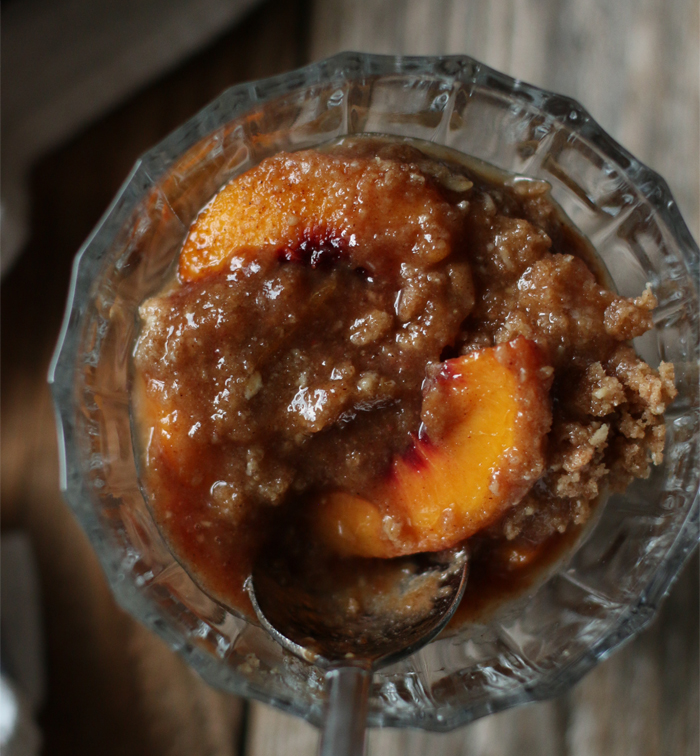 So much ooey-gooey goodness!  I was scraping the pan to get the last remnants out...